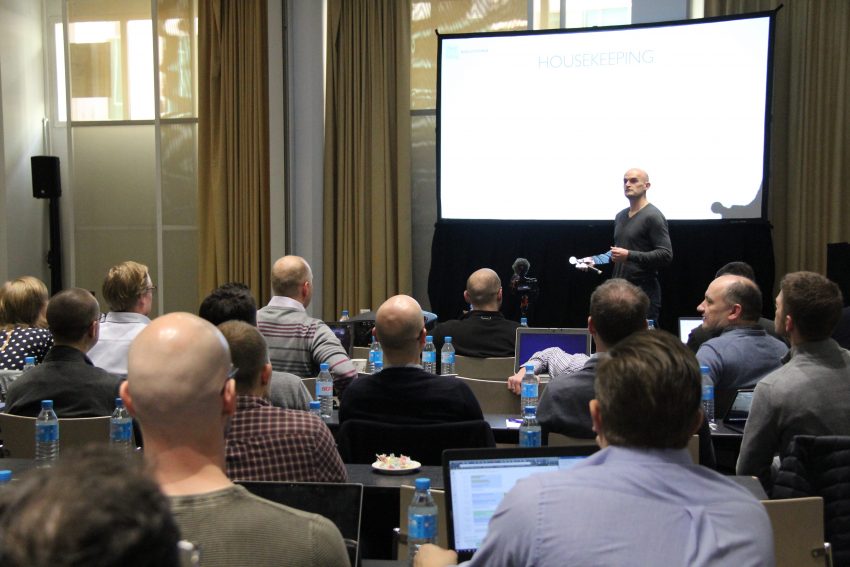 February 13 to 15 saw the CLA Summit 2018 take place in Madrid, Spain. This annual event – organised by the LabVIEW community and sponsored by NI – brings together LabVIEW Architects from all over thew world to present, discuss and debate all things LabVIEW related.

Picking up on something Joerg Hampel mentioned in his blog post (read it here), I would like to try and explain a little about why I attend these events. Anyone who knows me will tell you that I am not really what you would call a “people person”. For the most part I will actively avoid crowds and the thought of talking to people I don’t know fills me with fear, however for some reason the CLA Summit is different.

My first Summit was in Rome (2015), after getting off the plane the first “LabVIEW” person I spoke with was Steve Watts. Now I don’t know if you have ever met Mr. Watts but he is somewhat unique, a teenage punk rocker stuck in a middle aged mans body, who — although I didn’t know this at the time — is considered by most to be a leading light in the LabVIEW world. The term “don’t judge a book by its cover” may well have been invented for this tall, Mohican haired eccentric. So after blagging my way through a 30 minute conversation about LabVIEW we arrived at the venue and I proceeded to spend the next 3 days in a state of panic and nervous sweat. The only thing I remember from the presentations was that I really didn’t understand any of it, it was just a blur of diagrams and terminology that may as well have been written in hieroglyphics for all the good it did me.

I am sure that I met many people in those 3 days, and those I did meet will have to forgive me for not remembering. The one person who did stand out though was one Fabiola de la Cueva, a smaller than average Mexican in a bright red coat who’s lack of height is more than compensated for in loudness of voice. On the last day we shared a bus into Rome (along with Fab’s husband & Chris Roebuck) and during this trip I realised just how kind and lovely she is. The next time you see Fab, give her a hug and tell her Darren sent you…

In 2016 the CLA Summit was in Berlin, Germany. For this one I made sure I arrived early in the day so that I could see some of the city and maybe become a bit more comfortable in my surroundings before the event started. I had also managed to get a ticket for the pre-event meal (organised by Fab, for which we are all very grateful) so this gave me a chance to mingle and have discussions outside of LabVIEW.

For these 3 days I was very much more relaxed, helped in no small part by the friendliness and kindness of the other attendees. As I was more relaxed I can remember far more about the people I met, the conversations I had and also the presentations.

It was in Berlin that I really met people who I now consider to be my friends, fellow Architects such as Richard Thomas, Joerg Hampel and Malcolm Myers (more on these 3 in a future blog post). I also had the chance to meet many NI employees and it turns out that they are also quite nice people too (who knew?).

At the end of this Summit I felt much more part of the group, kind of accepted as a fellow LabVIEW enthusiast and eager to contribute more to the community. It was during dinner one evening, while chatting with Sacha Emery of NI, that I decided I would volunteer to present at the next CLA Summit. The following morning I realised what I had said…

My third Summit was in Vienna, Austria. This event was the one where I really felt that I’d “arrived”. This was mainly due to me presenting (you can read all about that fun filled day here) but also because I really felt like I was seeing long lost friends again, catching up with people from all over the world, hearing their stories and learning about new events in their lives. It is this feeling of community and friendship that really makes the CLA Summit something special. No-one is trying to out do any one else, there is no “oneupmanship” from anyone, everyone is there to listen, learn and also to teach.

For the CLA Summit 2018 in Madrid I decided not to stay in the venue hotel, so instead we (Chris Roebuck, Joerg Hampel and myself) rented an AirBnB just one stop further along the metro from the hotel. This was not only cheaper but also allowed us more flexibility in terms of meals, drinks etc. Something I didn’t count on though was that there would be no kettle in the kitchen, so it was pan on hob time, like off of the 30’s!! Although I cannot speak for the others, I thoroughly enjoyed the time spend into apartment and didn’t mind surviving on 6 hours sleep due to staying up late chatting.

My main concern with this structure is that it forces presenters to compete against each other, obviously not in a “Gladiators ready…” kind of way but I personally was a little apprehensive that no-one would attend my presentation, instead choosing the other track. To me this goes against what makes these events great, and also what makes the LabVIEW community different to others. Looking back it doesn’t seem to have had a negative effect on peoples experience of the event, it allowed more presenters to share their knowledge and gave people a choice.

One of my reasons for attending the CLA Summit is to broaden my knowledge, not necessarily to deepen it. If everyone is in the same room with no choice but to listen to the presentations then you never know what you may learn, now I am left with the feeling of “what could I have learnt”. It’s a bit like when you go to a restaurant and you choose the lasagne, but then you spend the next 20 minutes wondering what the pizza is like…

In one presentation (possibly by Nancy Henson of NI) it was mentioned that every time you learn something there is a rush of dopamine that makes you feel happy. During this years Summit I felt this same feeling, not when I learnt something, but when my opinion was sought, when my presentation or contribution was mentioned by another or simply when someone referred to me by name. While on the face of it this may seem quite selfish and egotistical, to me it is all part of being recognised by my peers, accepted into the community and really feeling like my opinion is valued. I do not know many places where such an experience exists, especially not among a group of such highly educated thought leaders.

Luckily my own fears were not realised when people actually came to see my presentation, I hope I managed to entertain those that listened. If you found that were not offended by something I said, let me know and I’ll try better next time…